What is Old is New 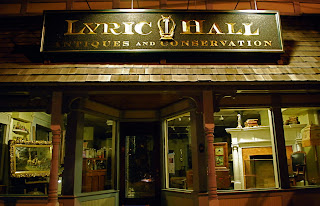 Last night, Shawn and I had the wonderful opportunity to play in a very unique performance space. The room, called the Lyric Hall, is located in New Haven, and on the surface of it, you would never know what surprise awaits in the back of this shop front. Granted, a look through the windows will let you know that this is the home of craftspeople, not so much an antiques store as a place where the past is carefully, artistically, and lovingly cared for and restored.
However, much like the pieces of history displayed in the shop window that may reveal a beauty not first apparent when found in grandma's attic, taking a little walk down the side of the building to its back entrance reveals a surprise that is both unexpected and welcome. It turns out, the Lyric Hall spent about 20 years of its early history as a Vaudeville performance hall, and the owners of the building have now lovingly restored the stage and part of the audience area to look like it would have back in the days of the traveling troupes. 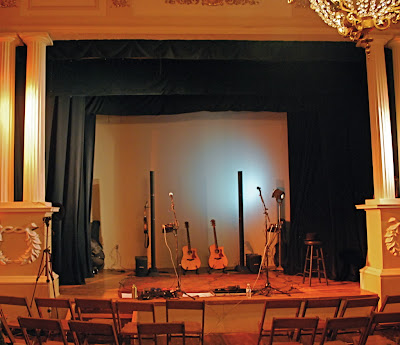 Last night, Shawn and I had the great privilege to be the first performers to re-christen this stage as a home for performances, and it was a truly wonderful experience. The acoustics of the room were perfect, especially for our blend of eclectic acoustic music. Having a stage that actually was big enough to comfortably hold the two of us was a treat too, after playing in several venues where you are simply tucked into an out of the way corner. Shawn and I celebrated the hall by dressing up a bit, and adding several Vaudevillian moments to the show. As an added bonus, WPKN from the University of Bridgeport came by to do a live broadcast of the concert. (Check out the archive recording of the broadcast HERE ) 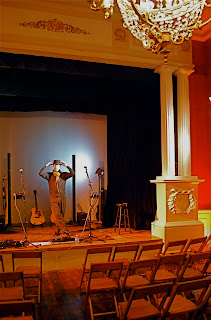 Doing this performance has led me to reflect a bit on how so much, music included, works in cycles. A large percentage of the concerts that Shawn and I now do are house concerts, held in people's homes for audiences very interested in listening to music. I am reminded that this sounds much like the salon concerts that used to be the mainstay of music performance, but which lost popularity as the concert hall replaced them.
All in all, it was a very special night, and we look forward to being able to return in the not too distant future for more music making and fun.
Posted by Dave Miller at 8:37 AM No comments: 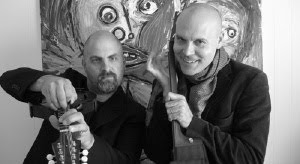